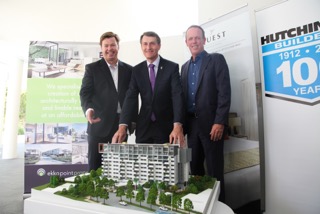 The accommodation hub combines 46 private residential apartments on the upper floors of the building with views towards the Brisbane CBD, and a 4.5-star, 85-room serviced apartment hotel complex on the lower levels.

Lord Mayor Quirk said that the Kelvin Grove Quest Cinqué project was a direct outcome of Council’s Hotel Investment Strategy, which had seen a significant boost in the number of new hotels and serviced apartments in the inner city.

“There is an increasing confidence in the Brisbane market and this new integrated Quest Hotel and Cinqué residential apartment complex in Kelvin Grove is a reflection of the demand for quality serviced apartments in Brisbane,” Cr Quirk said.

“With tourism numbers hitting one billion for the first time last year, these serviced apartments will be a valuable addition to Brisbane’s accommodation offering.”

The Quest and Cinqué property is located at 41 Ramsgate Street in Kelvin Grove and comprises of one bedroom, two bedroom and three bedroom apartments, for short, long and permanent residents, with on site car parking, conference room, gym, swimming pool and barbecue area. The project is one of a number of hotels that was inspired by the Brisbane City Council’s moratorium on Council infrastructure charges for new four and five start hotel developments.

Kelvin Grove Urban Village is an initiative of the Queensland Government and Queensland University of Technology (QUT) that brings together urban living, education, retail, health, recreation and business.

Cinqué developer, Mr Ben McCarthy from EkkoPoint Properties, a multi-disciplinary property group with a focus that encompasses all aspects of residential development, including small-lot and traditional land subdivisions, apartment development, as well as serviced apartments, townhouses and new homes, said integrated living has been a significant drawcard for apartment buyers and, as a result, the Cinque apartments sold out in record time.

“There is great appeal in being able to live independently while taking advantage of hotel benefits, such as security, accessibility and services,” he said.

“The Cinqué apartments incorporate sweeping 360-degree views, architecturally designed layout and have been affordably priced. This no doubt has supported demand and, together with the growing community, will continue to support resale. Kelvin Grove has certainly provided the perfect canvas for dual-purpose facility like Quest and Cinqué, and we are very proud to have been the creator of the development.”

Quest is the largest and fastest growing serviced apartment operator in Australasia with around150 properties located across Australia, New Zealand and Fiji. Quest Kelvin Grove is part of a significant network expansion across Australia over the next five years.

“We were delighted to partner with EkkoPoint Properties to deliver Quest Kelvin Grove, our sixteenth property in Queensland. The property is already enjoying strong occupancy rates, and feedback from our corporate guests has been extremely positive,” he said.

“I would like to thank the entire team at EkkoPoint for their dedication and commitment to this project and we look forward to a continued relationship with them.”

Kelvin Grove is a State Government renewal initiative of the old army Barracks. It is located around 2km from Brisbane CBD and close to Royal Brisbane Hospital, QCCR and QIMR. Developed on the principles of Ecological Sustainable Development, which aims to balance environmental, social and economic issues for long-term sustainability and, in addition to QUT, it is home to Red Cross, banks, shops and a range of restaurants and bars.